I had upgraded my blog without backing it up first, something I never do. I noticed after the upgrade and the theme change that the links to the archives were missing, returning 404 error codes. I tried repairing the permalinks and repairing each database table with no luck.

Thanks to the Penguin Web Hosting folks who host my site, they rapidly compared the latest set of fileson their daily backups with the current directories and noticed the .htaccess file missing.

The file was restored and the links to the archives are functional again.

If you ever wonder what the Apache .htaccess file does, here’s a good hyperlink to a page on the subject.

Never upgrade or promote a release to your prod environment without a backup or a rollback plan.
I should have known better :-p

Hi visitor,
I installed a WP update with a specific custom theme without backing up my file system and the links to the archives and categories have been lost, leading to 404 Pages. I’m aware of this. Thank you to all the people that have contacted me via email to let me know. The comment links also lead to 404 pages. We are in the process of restoring the lost files from the backups. Bear with us!
Thank you.
-PG

A day like today Carl Sagan would have turned 76 years old. This small post is a tribute to the veterans of the world wars who fought Nazism and intolerance.

Coming from a C# world I’m trying to get a grasp on the Java language, mostly for comparison purposes and to see if really the grass is greener on the other side of the fence.

What I like so far of the Java 1.6 that I see C# might benefit from:
1. The main one is cross platform portability. I wish Mono would have more support.
2. Enums are more complex, but I’m wondering if we ever really use that complexity…
3. Static imports, but do they really add to maintainability or make it worse?

What I find confusing in Java vs C#:

1. Checked exceptions: In Java, the exceptions that a method throws must be declared and are part of a method’s public interface. They were left out from C# on purpose. Here’s an interview made by Bruce Eckel (Thinking in C++) to Anders Hejlsberg (lead C# architect and Turbo Pascal creator, I should point out I wrote my first program in Turbo Pascal :-p)…
2. Initialization blocks, not the static ones that are similar to c# static constructors but instance initialization blocks…why would you ever use them? I’m still puzzled… 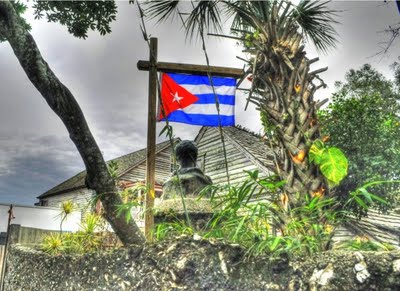 We drove to St Agustin while visiting Florida these holidays and to my surprise they had a museum with Martí and the Cuban flag :)… mi bandera.

I came across this article

Why use the Entity Framework? Yeah, why exactly?

refuting a marketing like article by one of the EF team members.

After using NHibernate for a while and looking into JPA and old JDO on the Java world, I don’t think I’ll get my hands on the EF any time soon, if I can avoid it.

Why? The main reasons are summarized on this site:

I will mention the most compelling ones to me:

As Peter Ritchie summarizes on his comment:
…if I’m a traditional TDD methodologist (for lack of a better term) and I’m building up my code base with test-first mentality then it’s all about the code. The automated tests are used for documentation of things like requirements, user stories, etc. Agile folk try to avoid documents like conceptual models, our conceptional model is the code, it’s our classes. I don’t need another conceptual modeler and I don’t need to have a modeler create new classes for me, I don’t need it to modify my classes, the classes I’ve defined for my application do exactly what they need to do.

As we build up our classes to reflect what the domain is, as we know it now, we eventually want to add the ability to persist those objects to a store of some sort. It’s at that point we being to think of OR/M. But we want to keep that persistence separate from our abstractions, keeping true to the single responsibility principle and separation of concerns. All the trappings of persistence are abstracted somewhere else.

Just my opinionated opinion…I have the gut feeling EF is sending ADO.NET back to the 1.1 version with Typed DataSets that were mere replicas of the database schema…

Ignorance is bliss and in this case persistence ignorance is a bliss I won’t give up on.

This is how the web used to look like back then :-p

It is the work of the architect and team leads to ensure the solutions are not addressed with duct tape/patch programming approach, but there is a design and long term planning associated to every project.

I’ve seen too many solutions already that fail on deployment due to data center constraints the developer was not aware of, where were the architects here?

I got this ad from a marketing person. I wasn’t going to post it as I’m not very fond of sales and marketing people.
I tried the game and found it cute, it’s similar to the contest that MSDN Canada launched a few years ago, the Last Developer Standing. I was eliminated quite fast on that one :-p

Check out the game at www.areyoucertifiable.com. Enjoy!

I’m trying to fix my dad’s website, after his gallery suffered a sql injection and his database is no longer with us. I needed to check if port 2077 was open on the server to map a folder as a drive on my windows explorer after a few problems with my ftp connection timing out.
To make the story short, how to enable the telnet client on Vista:
Go to Control Panel.
Go to Programs.
Go to Program and Features.
Click Turn Windows Feature on or off.
Check mark the telnet client.