I’m a big advocate of software maintainability and there is nothing better for that than applying well known patterns to improve the existing code. Each time I see long if..then..else constructs, or switch statements to drive logic, I think of how much better the code would be if we allow encapsulation and use one of my favorite behavioral pattern… => the Strategy Pattern. 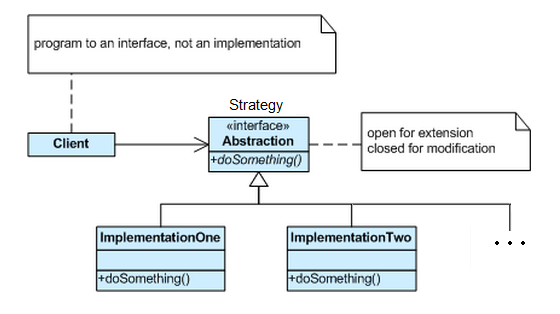 This is what this pattern will do for you: “Define a family of algorithms, encapsulate each one, and make them interchangeable. Strategy lets the algorithm vary independently from clients that use it.” (Gang of Four);

Specifies a set of classes, each representing a potential behaviour. Switching between those classes changes the application behavior. (the Strategy). This behavior can be selected at runtime (using polymorphism) or design time. It captures the abstraction in an interface, bury implementation details in derived classes.

When we have a set of similar algorithms and its need to switch between them in different parts of the application. With Strategy Pattern is possible to avoid ifs and ease maintenance;

Now, how can we digest that in code, now that you got the gist of the problem and want a better solution than your case statements.

This example I’ll be showing is a pure academic exercise:

The problem to solve is given a string as an input, create a parsing algorithm(s) that given a text stream identifies if the text complies with the following patterns. Angle brackets should have an opening and closing bracket and curly brackets should also have an opening and closing bracket, no matter how many characters are in the middle. These algorithms must be tested for performance.

What would be calling this code? For simplicity purposes, a Console C# program, here it goes:

The strategy pattern is used to solve problems that might (or is foreseen they might) be implemented or solved by different strategies and that possess a clearly defined interface for such cases. Each strategy is perfectly valid on its own with some of the strategies being preferable in certain situations that allow the application to switch between them during runtime.

Now, which strategy do you think performed better?